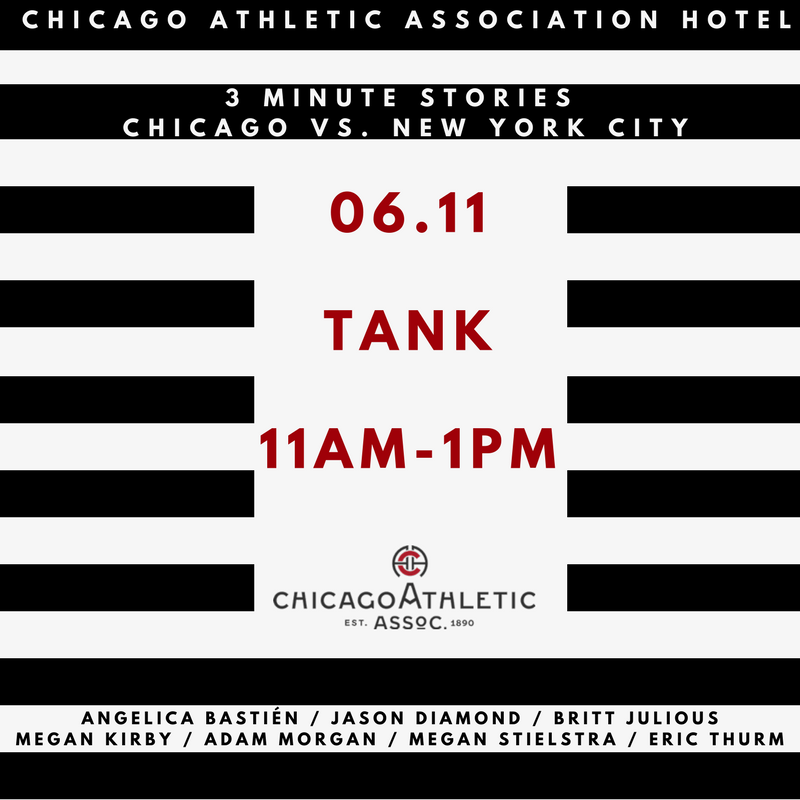 How long should it really take to tell a story? After years of going to readings where speakers stood at podiums for what felt like hours, the people behind the popular literary website and publisher, Vol. 1 Brooklyn, had enough. No more events with several readers reciting work that had no connection to one another, and no readings to last beyond 120 seconds.After dozens of successful events all across the country – featuring bestselling authors, musicians, comedians and other influencers looking to tell a story connected to a specific theme – the popular New York City-based event, “3-Minute Stories,” comes to the Chicago Athletic Association hotel.

Join us on June 11th and hear these compelling, consolidated narratives about “Chicago vs. New York City” from a dynamic panel.

Angelica Bastién: Angelica is a Chicago-based essayist and critic. She has been published by Vulture, The New York Times, Rolling Stone, and The Village Voice, and many more.
Jason Diamond: Jason is the author of the memoir “Searching for John Hughes.” He’s the Culture & Sports Editor at Rolling Stone, founder of Vol. 1 Brooklyn, and has been published by the New York Times, Paris Review, Esquire, Harper’s Bazaar, New Republic, Pitchfork, and many other publications.
Britt Julious: Britt is a journalist and essayist focusing on music, art, race, feminism, culture and politics. Britt has written for Esquire, ELLE, GQ, W magazine, Vice, The Guardian, and Pitchfork. She currently pens a weekly column for the Chicago Tribune and writes for Vice’s THUMP.
Megan Kirby: Megan lives and writes in Chicago. Her writing has appeared in Jezebel, Bitch Magazine, The Chicago Reader, and more. She self-publishes a few zines. One is about The NeverEnding Story.
Adam Morgan: Adam is an award-winning writer, editor, and adjunct professor in Chicago. He is the editor-in-chief of the Chicago Review of Books and author of North Carolina’s Wild Piedmont: A Natural History. His writing has been featured in The Denver Post, Electric Literature, Necessary Fiction, Chicago Reader, The Review of Contemporary Fiction, Strange Horizons, Bookpage, Bookslut, Booklist, Kirkus Reviews, Publishers Weekly, Literary Hub, Gapers Block, SF Signal, and elsewhere.
Megan Stielstra: Megan is the author of three collections including The Wrong Way to Save Your Life, forthcoming in August from Harper Perennial. Her work appears in the Best American Essays, New York Times, Poets & Writers, Guernica, Buzzfeed, and on National Public Radio. She teaches creative writing at Northwestern University.
Eric Thurm: Eric, a Brooklyn-based writer, writes for, among other outlets, The A.V. Club, GQ, Esquire, and The Guardian, and is the founder and host of Drunk Education.

This event is complimentary. Seating is first come, first served.

Contest: Submit a Design for our Button Machine

Community Partner Spotlight: League of Their Own