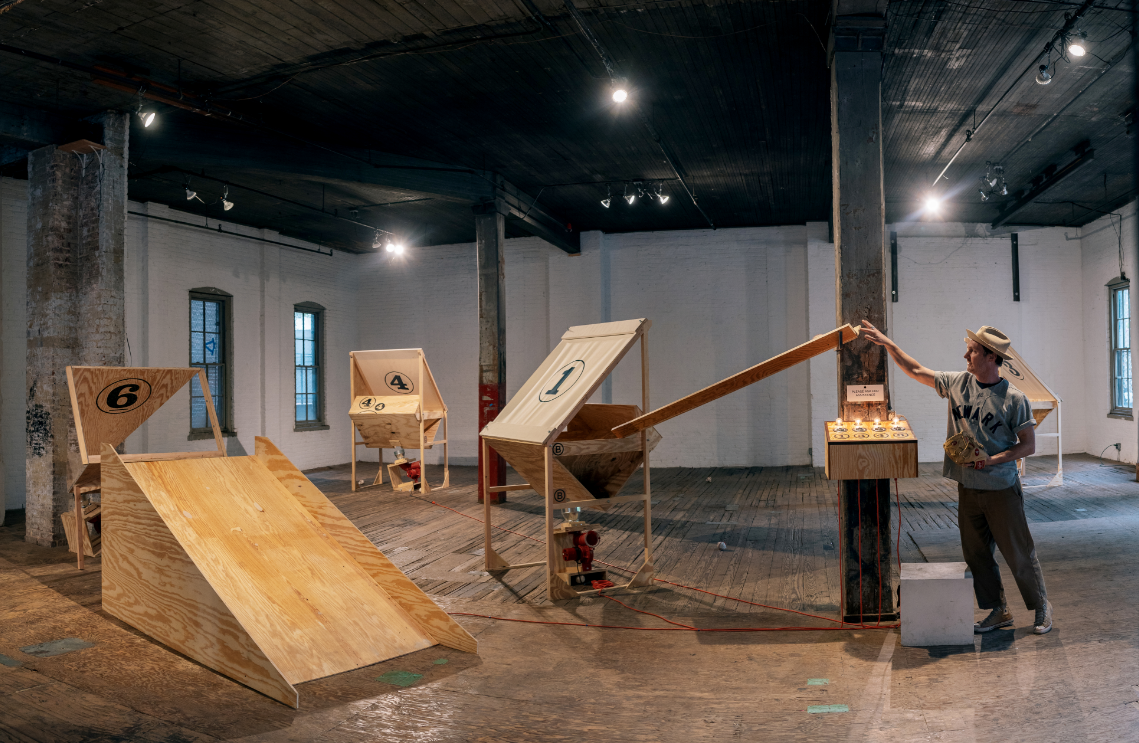 One Night Only Exhibition: The Six-Four-Three Machine

Chicago Athletic Association hotel is pleased to host a one-night-only exhibition of The Six-Four-Three Machine, making its way across the country. Stop into the Tank from 7-9pm for an up-close view, and to meet the men and women behind the installation.

About the Six-Four-Three Machine
It performs a double play. Forever.
In baseball, each fielding position has an assigned number: the pitcher is #1; the catcher #2; the first baseman #3… and so on. This way, each play can be described in specific shorthand. The Six Four Three Machine is a kinetic sculpture that perpetually repeats a 6-4-3 double play— a play where the ball is hit to the shortstop (position #6), who throws to the second baseman (position #4) for one out, and then to the first baseman (position #3) for another out. A series of catch-and throw stations, The Six Four Three Machine is an arrangement of parts that reproduces this occurrence, resets, and performs the act again. And again. And again.

A Note from the Artist, Mac Premo:
“I built this structure to share what a double play means to me: a confluence of circumstance and effort that culminate in real time and actual space, the whiz of the ball and the snap of glove leather echoing through both sound and shared memory… “A thing of beauty,” my father would say. I also built this structure to share what a double play actually is: a mere participant in a vast array of concurrent constructions. Like governments or Yahtzee or the Roth IRA, baseball is something we made up. There is nothing innate or inherent about baseball— it’s just some weird thing we invented. But that conceit does not diminish baseball— on the contrary: it secures baseball a place at the table of celebrated moments of human creation, alongside such giants as poetry, music, or the gyro.”