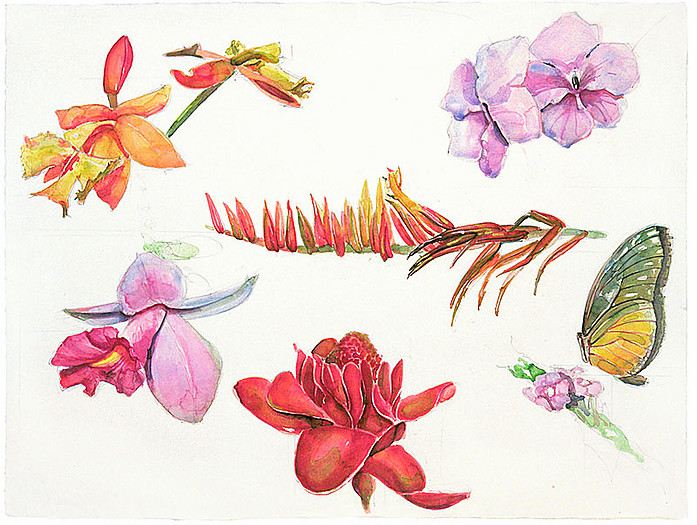 Chat with the Visual Artists behind the Field Museum

Join Field videographer Greg Mercer, Field Artist in Residence Peggy Macnamara, and renowned tattoo and visual artist Stephanie Brown for a panel discussion moderated by Aron Packer Aron Packer Projects of how to mesh science and art. The conversation will range from tactics while painting specimens, to designing tattoos based on skulls and shells, to joining scientists out in the Field. The panel will show how the Field’s work influences the arts, and vice versa.

While The Backroom will remain open to regular bar foot traffic during our events and discussions, seating for them is first come, first served. Following this discussion, enjoy Lumpen Radio‘s Green Screen Karaoke!

For the past ten years, Greg has produced an array of video and other content for The Field Museum, a place he discovered to be filled with people pursuing the same passions that fueled them when they were eight years old–scientists and artists pushing themselves to explore unfamiliar territory, following their curiosity, and devoting themselves to sharing stories with the public.  Working there has allowed him to hone his craft as a science communicator while weaving himself into the fabric of its community of scientists, artists, and storytellers. As an artist, he’s driven to share stories that inspire him and hopes to pass on that feeling of excitement and curiosity to others.

Thirty-five years ago, Peggy went to the Field Museum in Chicago to draw the Hoffmann Sculptures in order to improve her drawing skills. Instead, she found endless subject matter, a community, and a purpose for my work. She moved from Oriental artifacts, to birds, mammals, reptiles and insects, drawing daily from the exhibit areas. She also wandered through areas of the museum painting oddities like tiny Tibetan statuary and the South American Shrunken heads. She eventually moved behind the scenes into the collection areas where she did the “Illinois Insects” and “Architecture by Birds and Insects” books.  The adventure extended to outside the museum to collaborate with scientists in Madagascar, Africa, Central and South America, Alaska and other places enabling her to put her studies into context.  Much of the last ten years have been spent publishing her images with the intent to share with the lay community a better understanding of the world around us.

Stephanie graduated from the School of the Art Institute of Chicago, and has worked closely with Peggy Macnamara, the artist-in-residence at The Field Museum. Using the Museum’s natural history collections as a guide, she applies the fine line work of scientific illustrations to her tattoos and paintings. The flowing, organic lines in her drawings complement and accentuate the human form. Acknowledging the chasm between modern human experience and nature, the tattoos act as totems for the wearers to carry throughout their lives—and a reminder of our place in the natural world.

Starting in the late 80’s as an American folk art dealer, Aron Packer built his early business focusing on outsider art, and became known for a broad yet unusual vision.  He transitioned this vision to contemporary art and established his first public gallery in 1992 in Wicker Park, joining an alternative gallery scene that included Beret International, Ten in One, and Oscar Friedl Gallery.  As business forces changed over the past 20 years, Packer migrated to a couple of locations in River North and the West Loop, continuing to expand his notable group of contemporary artists. In 2015 he closed Packer Schopf Gallery on west Lake Street to pursue a lifestyle change.  Packer now works for Leslie Hindman Auctioneers in business development for fine art sales.  Additionally, ever the gallerist, Packer continues to avidly curate pop-up shows throughout Chicago as Aron Packer Projects.