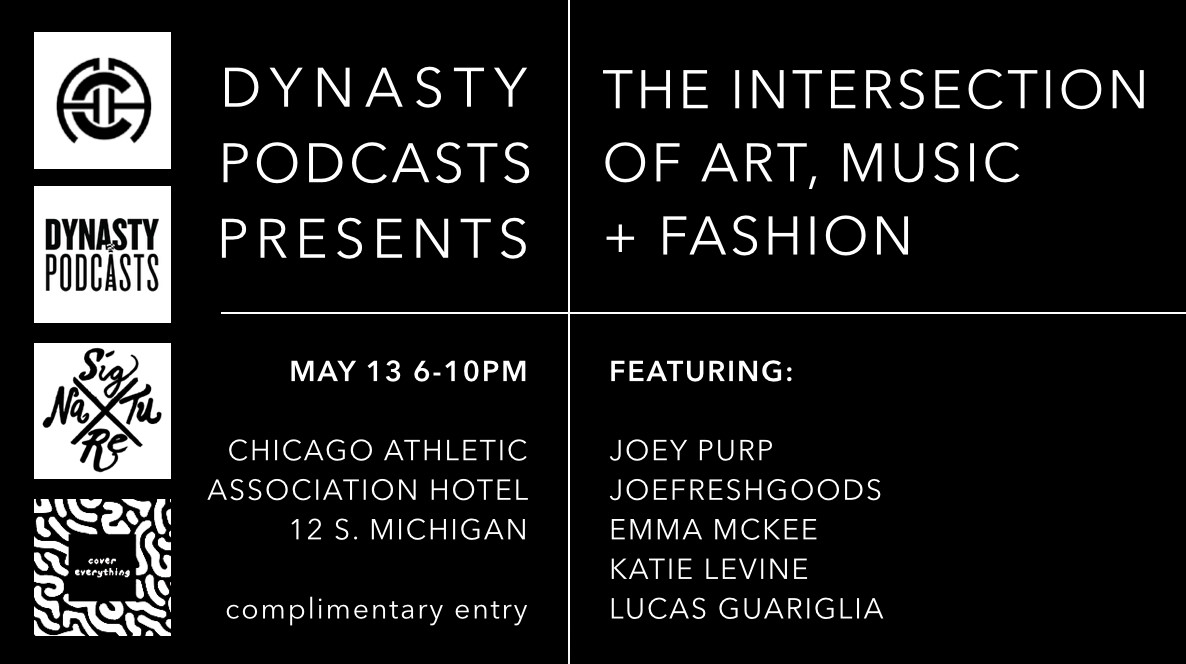 Dynasty Podcasts, Future Factory, Signature Branding and Rowboat Creative teamed up to bring you a powerhouse panel who represent the intersection of Art, Fashion and Music in Chicago today. Join us for an impactful discussion taking place in The Tank on the hotel’s ground floor from 6-8PM featuring;

Joey Purp: Joey Purp grew up bouncing between various neighborhoods of Chicago. In High School he realized that he had a talent for freestyle rapping. In 2012, Joey Purp released his first mixtape, The Purple Tape. In 2016, he released a mixtape, iiiDrops.Tentatively titled Eyedrops, it featured contributions from Chance the Rapper and Vic Mensa, among others. It was listed by Pitchfork Media as the “Best New Music.”

JoeFreshGoods: From working with local print shops, to growing a hub for the creative minds of Chicago, Joe’s name is getting household. While he is the front man of DopeBoyMagic and Fat Tiger, Joe doesn’t work alone – he’s a part of a well-oiled machine that spreads positivity through merchandise and crew love around the city. Partners Terrell Jones and Vic Lloyd combine efforts with Joe to form the Voltron that carries Chicago’s streetwear scene.

Emma McKee: Since 2014, she’s created countless pieces for musicians and artists both in and outside Chicago. But she never sells her work, employing a barter-only system, solely making pieces for creatives whose work she truly appreciates. Her work has been worn by many, including NoName, Hebru Brantley, Kevin Coval, Joey Purp, Vic Mensa, Chance the Rapper + more.

Katie Levine: Chicago native fashion photographer Katie Levine has been working in NYC the past 3 years in fashion and portrait photography. She previously worked as an intern at Vogue in Los Angeles and as a photo assistant at the Annie Leibovitz studio where she refined her skills. Her work has appeared in publications such as V magazine and Paper Magazine and she won first place in June 2014 for fashion division of the PDN “The Look” contest. She is involved in her local community in Staten Island and does most of her work at her studio there.

Lucas Guariglia: Rowboat Creative is a full-spectrum merchandising and branding company with services ranging from product development, screen printing, embroidery, cut & sew programs, and product fulfillment. As the President of Rowboat Creative, Lucas has played a big part in managing the chaos for many years dealt to Rowboat by by musicians, visual artists, designers, and festival promoters. He has also helped them manufacture/brand distinct and recognizable clothing that fans recognize and develop deep and lasting connections to. Lucas has a way of reassuring all of the above that their content is ready for the world to view and that Rowboat Creative will produce something really cool to accomplish the intended message. Lucas and Rowboat Creative have helped to bridge the gap between artist/creative(s) and manufacturing with a firm understanding of industry and trend.

Following the panel, the Tank transforms into a viewing party & pop-up store of Signature’s Spring/Summer 2017 clothing line & Lefty’s Cover Everything Spring/Summer 2017 line. There will be an installation by Lefty, work displayed by Katie Levine and Emma McKee with sounds from DJ Manny Muscles and EvieTheCool.

This event is complimentary. Seating for the panel is first come, first served.

Dynasty Podcasts and Future Factory partner to present a workshop and panel series at Chicago Athletic Association hotel. Dynasty Podcasts launched in 2005 as the City of Chicago’s first ever and longest-running music podcast, hosted by Jaime Black with a focus on Chicago’s creative communities. Future Factory is a non profit collective focused on art, music and tech founded by Autograf. The group specializes in curating creative content with partner locations, online, and from their gallery space located in Chicago’s Wicker Park neighborhood. Together, both organizations specialize in industry-centric events geared towards informing artistic and entrepreneurial audiences.

The hotel’s Storytelling Series features compelling stories and interviews from some of Chicago & beyond’s most interesting and inspiring movers, shakers and visionaries – giving an inside look into the experiences, moments and memories that have shaped their work and lives.  This week, we adapt our program for an instructive panel experience with Dynasty Podcasts and Future Factory.