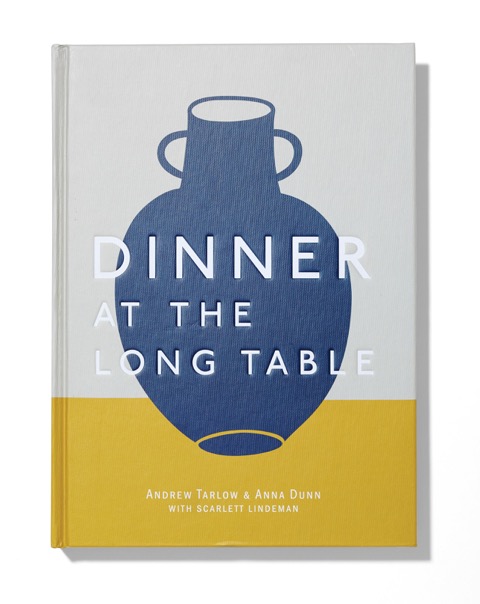 Largely credited with launching Brooklyn’s artisanal food movement, Tarlow has grown a restaurant empire on the simple idea that a meal can somehow be beautiful and ambitious, while also being unfussy and inviting. With this philosophy in mind, Tarlow wrote Dinner at the Long Table – a cookbook bursting with recipes for meals shared between family and friends. It’s already being heralded as one of the best cookbooks of the season.

Andrew will be joined with co-author Anna Dunn (also editor of Diner Journal, Tarlow’s quarterly culinary publication) for an afternoon of lively conversation, readings from the book, and a signing. We hope you can join us!

DINNER AT THE LONG TABLE

From Andrew Tarlow, the acclaimed owner of Brooklyn’s Diner, Marlow & Sons, Marlow & Daughters, Reynard, The Ides, Achilles Heel, She Wolf Bakery, Marlow Goods, Roman’s, and the Wythe Hotel comes this debut cookbook capturing a year’s worth of dishes meant to be shared among friends. Personal and accessible, Dinner at the Long Table brings Tarlow’s keen eye for combining design and taste to a collection of seventeen seasonal menus ranging from small gatherings to blow-out celebrations. The menus encompass memorable feasts and informal dinners and include recipes like a leisurely ragu, followed by fruit and biscotti; paella with tomato toasts, and a Catalan custard; fried calamari sandwiches and panzanella; or a lamb tajine with spiced couscous, pickled carrots, and apricots in honey.
Dinner at the Long Table includes family-style meals that have become a tradition in his home. Written with ANNA DUNN, the editor in chief of the company’s quarterly magazine Diner Journal, the cookbook is organized by occasion and punctuated with personal anecdotes and photography. Much more than just a beautiful cookbook, Dinner at the Long Table is a thematic exploration into cooking, inspiration, and creativity, with a focus on the simple yet innate human practice of preparing and enjoying food together.

ANDREW TARLOW
In 1999, ANDREW TARLOW opened his first restaurant, Diner, which serves locally sourced, New American food inside a refurbished 1927 dining car in the industrial neighborhood of South Williamsburg, in Brooklyn. Marlow & Sons, a restaurant, oyster bar, and general store soon followed next door, functioning as a cafe by day and a raw bar and restaurant by night. Other culinary ventures include Marlow & Daughters, a butcher shop specializing in locally sourced grass-fed meat; and Roman’s in Fort Greene, an Italian-inspired restaurant. In 2012, Andrew and his partners opened the Wythe Hotel and its ground floor restaurant Reynard in a turn-of-the-century factory building in Williamsburg. He most recently opened Achilles Heel, a riverside watering hole in Greenpoint. He is publisher of Diner Journal, an independent magazine featuring original art, literature, and recipes. Tarlow grew up in New York and began his career as a painter and a bartender at the Odeon. He now lives in Fort Greene with his wife, designer Kate Huling, and their four children.