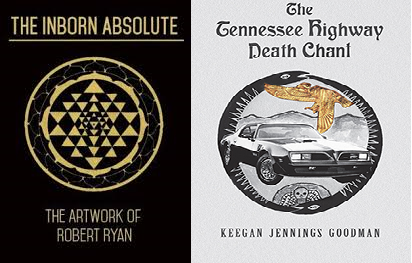 Robert Ryan lives in Asbury Park, New Jersey, where he has been painting and tattooing for twenty years. Ryan’s work has been featured in many galleries, schools, and publications worldwide. As a musician, he has released albums with the bands Lord Sterling, Out Like Lambs, and Harmonize Most High, as well as his solo effort American Cloud Songs.

Most recently he is the author of The Inborn Absolute. Ryan’s book, published by Featherproof Press whom are partners to the Storytelling Series, is available to the public officially on August 9th.

Keegan Jennings Goodman grew up in the Ozark Mountains, went to college in New York, then art school in Chicago, and now lives in Toronto, where he is working on a dissertation about the French philosopher Georges Bataille.

On Sunday, August 7th, Robert and Keegan will be in conversation with Tim Kinsella, publisher at Featherproof Press. We hope you join us a lively, recorded conversation between them.

About the Storytelling Series: The Chicago Athletic Association Storytelling Series shares compelling stories and interviews from some of the Chicago’s most interesting and inspiring movers, shakers and visitors. From artists, musicians, innovators, adventurers and visionaries with a great story to tell – the series gives an inside look into the experiences, moments and memories that have shaped the speakers, their work and their lives. CAA is known for its rich history, and while the walls can’t talk, the Storytelling Series continues the tradition of welcoming Chicago’s finest talent into its halls to make lasting memories. Only now, we’ll record and share those moments so worth remembering. Our highly anticipated podcast is now live here.

About Tim Kinsella: Tim Kinsella is the author of two novels, Let Go and Go On and On (2014, Curbside Splendor) and The Karaoke Singer’s Guide to Self-Defense (2011, Featherproof Books) and one book of non-fiction All Over and Over (2015, Joyful Noise / Featherproof Books). In 2014 he became the publisher and editor at Featherproof Books. Since 1996 his band Joan of Arc and its related projects have released dozens of albums and they continue to tour internationally on a regular basis. In 2015 he was both the Artist-in-Residence at Joyful Noise Records and the Visiting Writer at Roosevelt University, as well as serving on the programming committee at Chicago Filmmakers.