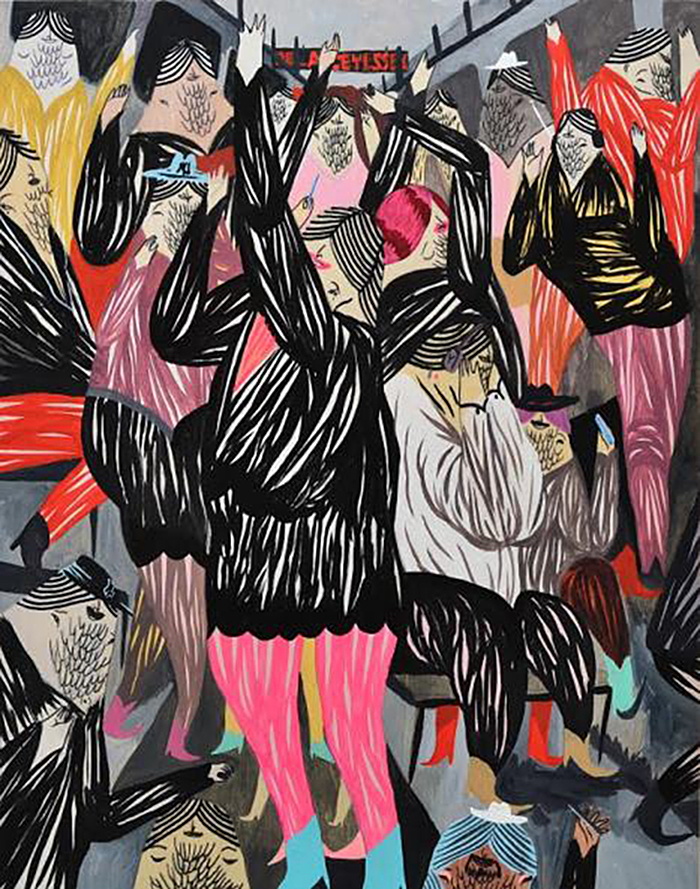 Join us in the Drawing Room on Sunday April 24th for our latest installment of the Storytelling Series.  This day, we bring in artist Ian Ferguson (AKA HYDEON) and Featherproof Press publisher, Tim Kinsella.

They’ll discuss Ian’s hypnotic line-work and sophisticated sense of color which he has been creating, recreating and refining in a singular parallel universe in paintings and drawings for years.  They will also discuss his compulsive dedication to his craft and what aspects of our culture he appropriates and fuses.

IAN FERGUSON (AKA HYDEON) IS A CONTEMPORARY ARTIST, DESIGNER, AND PRINT MAKER LIVING AND WORKING IN BROOKLYN. HE WAS BORN IN NATIONAL CITY, CALIFORNIA IN 1985 AND GREW UP IN SAN DIEGO. HE RECEIVED HIS BS IN GRAPHIC DESIGN FROM THE ART INSTITUTE OF CALIFORNIA – SAN DIEGO IN 2006. HE HAS LIVED AND WORKED IN SEATTLE AND CHICAGO BEFORE MOVING TO NEW YORK CITY IN 2014. HIS WORK EXPLORES A SANDBOX OF CURIOSITIES THROUGH THE LENS OF HIS LIFE EXPERIENCE. HE OFTEN DEPLOYS NARRATIVE DEPICTIONS OF HIS ENVIRONMENT AS WELL AS MEMORIES OF LUCID DREAMS, METAPHYSICAL IDEAS, ARCHITECTURAL MOVEMENTS, LIVING MOUNTAINS, BREATHING CITIES, AND VARIOUS QUALITIES OF NATURE. FERGUSON PRIMARILY WORKS IN GOUACHE, ACRYLIC, GRAPHITE, AND INDIAN INK TO CREATE HIS WORKS ON CANVAS, WOOD PANEL, AND PAPER. HIS CREATIVE APPROACH STEMS FROM TRIBUTARIES OF FOLK ART, OUTSIDER ART, STREET ART, FINE ART, AND ELEMENTS OF GRAPHIC DESIGN. FERGUSON ALSO MAKES INSTALLATION ART, PUBLIC MURALS, VIDEO ART, MUSIC PRODUCTION, AND IS THE FOUNDER OF CHICAGO BASED RECORD LABEL BARO RECORDS.

According to its mission statement, Chicago’s Featherproof Press publishes strange and beautiful fiction and nonfiction and post-, trans-, and inter-genre tragicomedy. The Featherproof podcast, hosted by publisher Tim Kinsella, expands on this sensibility by interviewing guests that we know to have interesting stories whether or not they identify as writers or artists or performers or exist as public figures in any way. We know that everyone has a story and we aim to help them release it.